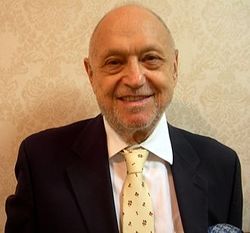 Charles Strouse (b. 7 June 1928, New York City) is an American composer and lyricist best known for writing the music to the musicals Bye Bye Birdie and Annie, amongst others.

A graduate of the Eastman School of Music, Strouse studied under Arthur Berger, David Diamond, Aaron Copland and Nadia Boulanger.

Strouse's first Broadway musical was the 1960 hit Bye Bye Birdie, with lyrics by Lee Adams, who would become his long-time collaborator. For this show, Strouse won his first Tony Award in the category of best musical, and Bye Bye Birdie is considered the precursor of the rock musical. Strouse's next show, All American, with a book by Mel Brooks and lyrics by Adams, came in 1962; it was not a success but it produced the standard Once Upon a Time Following this were Golden Boy (1964, also with Adams), starring Sammy Davis, Jr. and It's a Bird, It's a Plane, It's Superman (1966, based on the popular comic strip) which was modestly successful.

In 1970, Applause (starring Lauren Bacall, with book by Betty Comden and Adolph Green, and lyrics by Adams) won Strouse his second Tony Award. In 1977, Strouse adapted another comic strip for the stage, creating the hit Annie, which included the song Tomorrow, which quickly became a "monstrous song hit," and garnered him his third Tony Award and two Grammy Awards.

Strouse's film scores include the classics Bonnie and Clyde (1967), There Was a Crooked Man... (1970, with Henry Fonda and Kirk Douglas), The Night They Raided Minsky's (1968, with Adams) and the popular animated movie All Dogs Go to Heaven (1989). He and Adams also wrote the theme song Those Were the Days for the television show All in the Family. Strouse's songs have been heard on the radio throughout his career and have run the gamut from girl-band pop to hip hop.

Strouse's writing also extends into orchestral works, chamber music, piano concertos and opera. His Concerto America, composed in 2002 to commemorate 9/11 and the spirit of New York City, premiered at The Boston Pops in 2004, and his opera Nightingale (1982), starring Sarah Brightman, had a successful run in London, followed by many subsequent productions. In 1977, Strouse founded the ASCAP Musical Theatre Workshop in New York, through which many young composers and lyricists have found a forum for their work.

Strouse has won Emmy Awards for music in television adaptions of Bye Bye Birdie and Annie. He is also the recipient of the ASCAP Foundation Richard Rodgers Award and the Oscar Hammerstein Award. He is also a member of the Theater Hall of Fame and the Songwriters Hall of Fame.