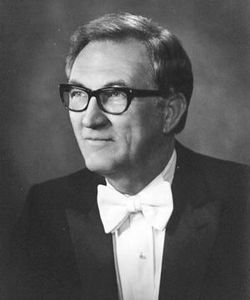 Dr. Wiley began school in Abilene, but when his father, Dr. D. O. Wiley became band director at Texas Tech, the family moved to Lubbock where Pete graduated from Lubbock High School in 1942. He attended Texas Tech, earning a bachelor's degree in mathematics. He received a master's degree in music from the University of Texas, and a Doctor of Education degree from the University of Colorado. While attending Tech, Wiley played oboe and was drum major of the Texas Tech Band conducted by his father. He also did undergraduate study in music at the University of Kansas where he assumed the duties of drum major, and played first oboe in the band and orchestra, both conducted by his father's brother, Russell Wiley.

Dr. Wiley served a year as oboe instructor at the University of Kansas, and three years as assistant band and orchestra director with Weldon Covington at Austin High School in Austin, Texas. In 1952, he became director of bands at Lamar Tech, later to become Lamar University, in Beaumont, Texas.

The Lamar Symphonic Band, under Wiley's direction, performed by invitation at T.M.E.A. conventions five times, the first being in 1957 and the last being in 1980. The band also performed at two regional and three national M.E.N.C. conventions, and by invitation at three A.B.A. International conventions, and one regional convention of the College Band Directors National Association. The symphonic band also toured Mexico on five different occasions, traveling as far as Mexico City.

Dr. Wiley was an active member of the American Bandmasters Association, Alpha Chapter of Phi Beta Mu, and is the past National President of Kappa Kappa Psi. He was also a member of T.B.A., T.M.E.A., and T.M.A.A. (Texas Music Adjudicators Association). He was recognized by the School Musician Magazine of as one of the Ten Most Outstanding Band Directors in the U.S. in 1977. He was selected as Texas Bandmaster of the Year in 1989.

Wiley founded the publishing company TRN in 1973. He resided in New Mexico, where he managed the company until his death.