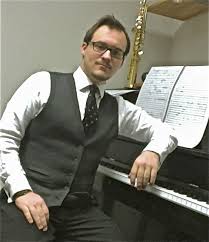 The impetus for the composition of the Chamber Symphony came from two sources. The first was my love for the chamber orchestra works of the French modernists (Milhaud, Tailleferre, Ibert and the like). These are works that have had a pronounced impact not only on how I composer but on how I engage with music in general, I've wanted for some time to write a work that openly pays homage to these compositions and composers, and this piece serves that purpose.

The second impetus – the one that made me decide that the time was right for this project – was the COVID-19 pandemic, and the forced scaling down of musical endeavors that came along with it. In addition to writing a number of small chamber works during this time, I (and many other composers) turned our attention to ways to bring a large ensemble feel to work for a relatively limited number of musicians. The instrumentation of the Chamber Symphony is designed not only to achieve this goal, but alto to take advantage of the intimacy afforded by a relatively small group of performers. This piece calls on each performer to both rise to a high level of virtuosity and to weave their individual sound into that of the whole.

The firs movement begins with the utmost simplicity; a four-note motive is passed through the voices of the ensemble developing and intensifying as it goes. The energy of the movement grows until it exhausts the ability of the original motive to keep up, at which point a melodic idea takes over, beginning with a saxophone solo, but eventually growing to include the entire ensemble. The original motive returns to close the movement.

The second movement had a more improvisatory and introspective nature, with different instruments picking up soloistic line and winding them through each other, all over a slightly skewed rhythmic pulse (a multi-layered hemiola, for any music theorists reading). The initial section's pandiatonicism gives way eventually to a bitonal/bimodal area that gives the piece a more direct, even lilting quality. This in turn progresses into the final section built around a minimalist(ish) pulsing and a parsimonious chord progression set against a fanfare-like melody in the brass. In simpler terms (read: language for non-theorists): the movement moves from a drifting, somewhat listless beginning into sections of increasing levels of energy, while keeping a general mood of introspection and meditativeness.

The final movement is just fun. The opening, a quasi-fugue (the principal motive of which continues throughout the entire movement), is an explicit reference to the jazz figure in Darius Milhaud's La Creation du Monde. The fugal idea falls away fairly quickly in favor of rapidly developing inner sections that build up to the final sections that can only be described – as the movement's title suggests – as raucous. Here. The tuba takes charge with a soloistic bass line inspired by my performative roots in jazz and funk styles and the intersectionality between early jazz and the music of the French modernists, with the remaining musicians falling into place as thy might in a big band, with short, backing hits, and quick solo interjections. After a final breath, a brief shout chorus carries the piece to its conclusion.

Though not a commission in the traditional sense, a great deal of credit for this composition goes to my friend Chief Warrant office Jeffrey Spenner, assistant director of the United States Coast Guard Band, who expressed profound interest in this piece at each stage of its composition.