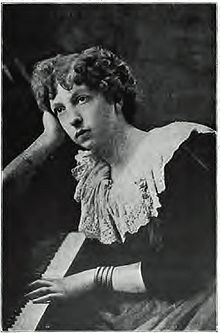 She was born into a musical family. Her father was an excellent violinist and her mother was known as a remarkable pianist and singer. Chaminade studied piano with her mother, who was her only teacher until she was 15. After hearing some of her compositions, written at the age of eight, Hector Berlioz encouraged her parents to give her a complete music education. At 15 she began studying fugue and counterpoint with Augustin Savard, followed later by piano with Félix Le Couppey and composition with Martin-Pierre-Joseph Marsic and Benjamin Godard. She gave her first public piano recital at 16 and the first recital of her works at age 18.

Chaminade toured as a concert pianist to many cities, including Philadelphia where she played her Concertstuck with the Philadelphia Orchestra in 1908. During the tour she appeared on a music symposium with John Philip Sousa regarding the question of popular music.

Chaminade also wrote literary articles, including a chapter in the The international Library of Music on the life of Georges Bizet (a neighbor near Le Lisenet when she was a child).