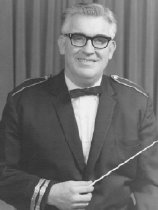 Mr. Karrick received a Bachelor of Science degree at Eastern Kentucky University, a Master of Arts degree at the University of Kentucky, and did additional graduate work at Louisiana State University and the Cincinnati College of Music. He served in the U.S. Army Air Forces during World War II, playing trumpet in the band at Keesler Field. He was also chief arranger for that band.

Karrick was a high school band director for 42 years. Although known to the band world through his compositions and arrangements, he is also known for his many achievements as a music educator. He was elected to the American School Band Directors Association in 1965, served as the Kentucky state chairman, and for ten years was chairman of the Volkwein Award Committee. In 1960, he was recognized by The School Musician magazine as one of America's most outstanding band directors.

He composed more than 390 marches during his career.