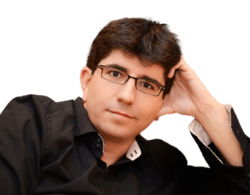 Carlos Pellicer (b. 1977) is a Spanish composer and conductor.

Mr. Pellicer studied in different music schools, Spanish conservatories and academies as well as in an independent way with renowned teachers, specialized in conducting and composition. He frequently lectures on his music and is often invited as a music consultant on many recordings and participates as a jury member in many competitions, mainly in Spain and Italy.

He currently conducts the U.M. Llutxent, Valencia, as well as teaching music education classes and works for the Dutch publisher Molenaar Edition, who publishes his music for band.

Carlos has received many national and international awards for his compositions. The most outstanding prizes are: the second prize and Honourable Mention of the XXVII Edition of the prestigious International Contest for Original Band Composition in Corciano, Italia 2009, and first prize of the same contest in the XXIX Edition 2013 and the Euterpe award of music 2014.