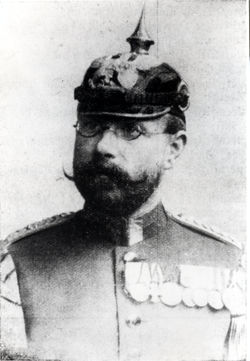 Even as a child Firedemann received lessons for piano and violin. He studied music in Halle (Saale) and with the court conductor Emil Büchner in Erfurt. By 1883 he conducted the orchestra of the Reunion theaters in Erfurt; he left this appointment in 1885, meanwhile he had also learned to play clarinet. He then joined the band of the 71st (3rd Thuringian) Infantry Regiment in Erfurt and continued his musical training, found a way to operate a soloist in the concerts as a violinist and pianist. He also served as conductor of various choirs and choral societies. In 1888 he composed as a tribute to the dying emperor, the now famous Kaiser Friedrich Marsch. On November 5, 1890 he passed the military band testing at the Academy of Music in Berlin.

On 20 September 1891 he became conductor of the band of the 113th (5th Baden) Infantry Regiment based in Freiburg im Breisgau. He worked here for 21 years, and his fame as a conductor and composer spread beyond the national borders. In 1901 he was appointed Royal Kapellmeister in Baden and in 1906 he was appointed Royal Music Director. In January 1912 Friedemann was with his regimental band at the Café Kropf in Freiburg, for his farewell concert. For health reasons he left military music in 1912.

A new commitment was waiting for him in Bern, Switzerland. There he became head of the Bern Town Band, Stadtmusik bern, and led this wind orchestra to a respectable level, awarded the first Rank 1st Gold laurel at the 1906 Federal Music Festival in Freiburg. With this band he made trips to Germany, France, Italy and Spain. In 1935 he was appointed music professor because of his outstanding service. He also founded a self-published and a music school in Bern.