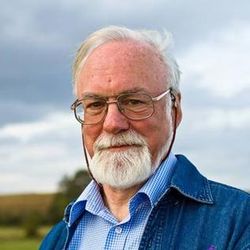 Commissioned by the Guildhall School of Music and Drama with funds provided by Greater London Arts, Canyons is a response to the imposing landscapes of the American Southwest. It is not an attempt to match in music the grandness of this landscape, nor an attempt to describe in music the indescribable, but simply an exploration of musical ideas which in themselves derive from a personal response to this area. It should be stressed that the canyon scenery is not merely grandiose -- it is bursting with an inner energy as well as obvious massiveness, and there is a sense of distance which is important, too.

The piece falls into four main sections. Following the introductory build-up in brass and woodwind, there is a slowish first section with massive chords, percussive pounding and some contrapuntal development of the work's main thematic idea. This is followed by a brief scherzo, in which different ideas, mostly based on chordal patterns, are juxtaposed in different ways, and then a slow movement which again derives from chordal material and another contrapuntal development. The fourth section is a more extended Allegro vivace, dominated by a dance-like theme introduced by the trumpets and an important motif heard at the start on brass and percussion. After the final climax, the Adagio epilogue leads the music to a quiet close, the solo piccolo restating the cornet figure heard at the opening of the work.

The first performance was given at the Barbican, London, on July 9th 1991, by the Guildhall Symphonic Wind Ensemble with their conductor, Peter Gane, and the work is dedicated to these artists.