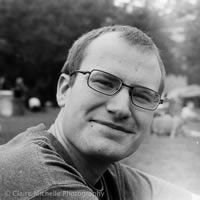 Bryce Craig (b. 1990) is a freelance composer, percussionist and music engraver.

Mr. Craig's works have been performed nation-wide at events such as the National Conference on Percussion Pedagogy, the 2015 PARMA Music Festival, the New York City Electroacoustic Music Festival, and numerous Society of Composers, Inc. conferences. Bryce’s orchestral work Tracks was the winner of both the Duluth-Superior Symphony’s 2015 James and Paula Nelson Young Composer’s Competition and the Holland Symphony’s 2015 Young American Composer Competition.

Bryce is also heavily involved in the world of dance music, working closely with several choreographers and studios across the country.

In addition to his work as a composer Bryce is active as a percussionist and private percussion instructor, and primarily performs on the MalletKAT MIDI controller.