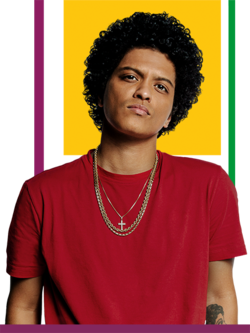 Mars moved to Los Angeles in 2003 at 18 to pursue a musical career. After being dropped by Motown Records, Mars signed a recording contract with Atlantic Records in 2009. In the same year, he co-founded the production team The Smeezingtons, responsible for various successful singles for Mars himself and other artists.

Mars rose to fame in 2010 with the release of the successful singles Nothin' on You by B.o.B and Billionaire by Travie McCoy, both of which featured his vocals on the hooks. His debut studio album Doo-Wops & Hooligans (2010) peaked at number three on the US Billboard 200. It spawned the singles Just the Way You Are, Grenade and The Lazy Song. The former won a Grammy Award for Best Male Pop Vocal Performance.

Mars' second album, Unorthodox Jukebox (2012), peaked at number one on the US Billboard 200, Australia, Canada, Switzerland, and in the UK, winning a Grammy Award for Best Pop Vocal Album. Its singles Locked Out of Heaven and When I Was Your Man reached number one on the US Billboard Hot 100,. In 2014, Mars collaborated with Mark Ronson on Uptown Funk, which topped many music charts worldwide. His third studio album, the R&B-focused 24K Magic (2016), debuted at number two in the United States, Canada, and New Zealand. It received seven Grammy Awards, including major categories Album of the Year, Record of the Year, and Song of the Year and yielded the successful singles 24K Magic, That's What I Like and Finesse.

Mars has sold over 130 million records worldwide, making him one of the best-selling artists of all time. He has released seven number-one singles on the Billboard Hot 100 since his career launched in 2010, attaining his first five faster than any male artist since Elvis Presley. Mars has received many awards and nominations, including eleven Grammy Awards, three Brit Awards, three Guinness World Records, and was named one of Time's 100 most influential people in the world in 2011. In December 2013, he ranked number one on the Forbes 30 under 30 list. Mars is known for his stage performances and retro showmanship. Mars performs in a wide range of musical styles.