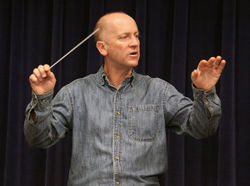 Brendan McBrien (b. c. 1960) grew up in Sunnyvale, California, where he began his musical training on the French horn in fourth grade. At 16 he began private study with one of his lifelong mentors, Jack Russell. After moving to Southern California he received his Bachelor and Master's degrees in music composition and conducting from California State University, Long Beach where he studied horn with Calvin Smith, composition with Justus Matthews, and conducting with John Alan Carnahan.

Brendan began teaching in Irvine in 1988 and is currently the director of instrumental music at Rancho San Joaquin Middle School.

Brendan’s numerous compositions and arrangements for band and orchestra are performed worldwide and published with the Alfred, Kendor, Kjos, and Wingert-Jones Music Companies. He is an active adjudicator, clinician, and frequent honor group conductor, and has served multiple terms on the board of the Southern California School Band and Orchestra Association (SCSBOA). He has presented several workshops at both the CBDA and the CMEA state conventions as well as numerous presentations for the SCSBOA. He has received multiple awards from the SCSBOA, has been honored with the Irene Schopfle Lifetime Achievement Award from the OCMAA, and was awarded Middle School Teacher of the Year for the Irvine Unified School District in 2013.