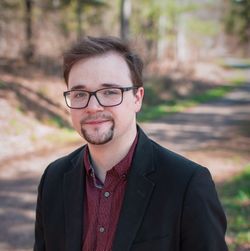 Brandon Dicks (b. 1994, Roswell, Ga.) is an American composer, arranger, and trumpeter.

Mr. Dicks received his double master’s degree in trumpet performance and music composition at the University of Hartford where he is studied trumpet with Phil Snedecor and composition with Robert Carl, David Macbride, and Gilda Lyons. He also holds a Bachelor of Arts degree in music education from Columbus State University where he studied with Robert Murray. Brandon is currently [2021] pursuing a doctorate in trumpet performance at Arizona State University while being a teaching assistant for his current trumpet teacher, Joe Burgstaller.

Brandon's music is inspired by visual imagery. Having visual synesthesia, he takes inspiration from visual images and depicts the colorful emotions expressed through music from each illustrated idea. He either reacts to popular media with his music or creates his own visually creative idea to give ground to the composition. Mr. Dicks’ works have been performed by the Columbus Symphony Orchestra, Hartt Wind Ensemble, Foot in the Door, Black Bayou Brass Trio, and Up/Down Percussion Quartet. His music has also been performed at the International Trumpet Guild Conference, Music on the Bayou Festival, and the International Double Reed Society Conference.

Brandon won the audience choice award at the IDRS Composition Competition on 2016, and he won first prize in the state division of Music Teacher’s National Association while receiving honorable mention in the Southern Region of MTNA. He also was a finalist in the CBDNA 2019 Young Composer and Conductor Mentor Project.

As a trumpeter, Brandon has performed with the Broad Street Orchestra as a principal trumpet, Columbus Symphony Orchestra, Hartt Faculty Brass Quintet, Rhode Island Recording Ensemble, Ivoryton Playhouse, and Playhouse on Park. He has been a trumpet artist for the Next Generation Trumpet Competition. He was a semi-finalist in the graduate division of the National Trumpet Competition and a finalist in the Paranov Concerto Competition at the University of Hartford. He has performed at multiple different conferences including, International Trumpet Guild and the Southeastern Trumpet Festival.

Mr. Dicks' many job titles include the co-director of the Trumpeter’s Multi-Track Competition and Seminar, the marketing and social media director of Rhode Island Recording Ensemble, and the associate music editor and production manager of the New Baroque Soloists. Alongside his career as a musician and manager, he also runs his own YouTube channel called BDicksmusic.

Prior to his current [2021] the teaching assistant position at Arizona State University, Brandon has taught at the Farmington Avenue Music Academy in West Hartford, Conn. He also taught at the Artist Collective in Hartford, Conn., and the Schwob Preparatory Division during his time at Columbus State University. Brandon has also published a trumpet method book called Scales with Character: Scales Exercises and Character Studies. Alongside publishing the book, he also runs a trumpet teaching YouTube series that follows the book.