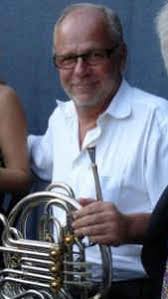 Bard Warnaar (b. 1950, Flint, Mich.) is an American composer, hornist and artist.

Mr. Warnaar attended the Interlochen Arts Academy for three years as a French horn major, and attended the Eastman School of music. He performed for three years with the Rochester Philharmonic Orchestra , then Karel Ancerl and the Toronto Symphony Orchestra, as well as the National Arts Centre Orchestra in Ottawa and the National Ballet of Canada. He also played with Rob McConnell’s famed jazz band, The Boss Brass, and was Principal Horn of the Hamilton Philharmonic Orchestra for three seasons.

Moving to Los Angeles in 1980, Mr. Warnaar was an active studio musician, playing on hundreds of movies and TV shows. He has played with the Los Angeles Chamber Orchestra since 1982, and the Los Angeles Philharmonic.

Mr. Warnaar has written music for the concert stage, as well as for movies, TV, and commercials. He has ghost written and orchestrated music for well over 100 movies.