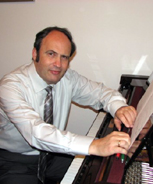 Dr. Pigovat studied at Gnessin Music Institute (Academia of Music) in Moscow. Between 1978 and 1990 he lived in Tadjikistan, and immigrated to Israel in 1990. In 2002 he received his Ph.D. degree from Bar-Ilan University (Israel).

In 1988 he won the special distinction diploma at the International Composers Competition in Budapest for his composition Musica dolorosa No. 2 for Trombone quartet.

In 1995 he received the Prize of ACUM (Israeli ASCAP) for his composition Requiem The Holocaust for Viola & Symphony Orchestra. The world premiere of Requiem took place at the Memorial evening dedicated to the Babi Yar tragedy (Kiev, 2.10.2001).

In 2000 he received the prize of the Prime Minister of State of Israel.