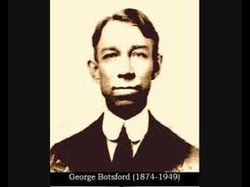 Ragtime music enjoyed peak popularity between 1897 and 1918. It began as a modiﬁcation of the march form, with additional “ragged” or syncopated rhythms originating in African musical styles. Black and White Rag was published in 1908 and is Botsford’s most familiar composition.

Written in 1908, this was the most famous of George Botsford's more than twenty rags. Old-time syncopation for all the woodwinds and brasses, splash cymbal, wood block, and all the mallet percussion you want to add - plus the glorious Arthur Pryor trombone smear. A surefire recipe for FUN in the band room and concert hall!