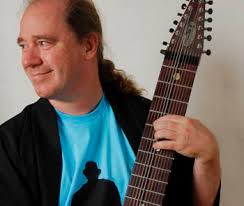 I love a good march. It’s one of the best vehicles for pure exuberance ever invented. The idea for Big World came to me while I was deep in the throes of completing a long and difficult orchestral work. I worked on it in my spare time as an escape and a relief valve. It kept me happy and sane. I sincerely hope that some of that same joy comes through to you as you listen.

This is a piece that takes full advantage of the blurry lines that separate traditional march rhythms from second line or shuffle rhythms. All of these styles draw from the same deep rhythmic well, and it’s fun to float back and forth between genres, all the while keeping the same rhythmic spine. The snare drum, tenor drum, piatti and bass drum act as the backbone for a stew of musical ingredients. There’s even a quick moment of clave thrown in, just to keep things interesting.

A bright fife-and-drum fanfare acts as the introduction and as a recurring thread. It’s first presented on the piccolo and flutes, and then comes back later on in the piece with a vengeance on the trumpets and trombones. The main melodic themes of Big World are cast in a traditional mold, very much in keeping with the long history of march music. One short transitional bass line heard early in the piece eventually turns out to be the seed for an entire middle section. It shows up after each verse, a little bit longer each time, and eventually morphs into a giant celebratory processional (with the fife-and-drum theme clattering over the top on xylophone). The processional repeats several times with variations before finally giving way to the triumphal return of the main march music. The opening fanfare then sounds once more to bring us home, with a noisy assist from a generously-sized percussion section.