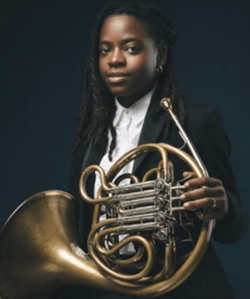 This is a piece for wind band, inspired by the Hip-Hop sub-genre “Trap Music” which finds its roots in my hometown, Atlanta, Georgia. The piece includes textures, melodic, rhythmic and harmonic content that are divergent to the traditional wind band realm. When performed, the piece utilizes electronic and acoustic means.

Big City Lights is a piece for wind band, inspired by the hip-hop subgenre "trap music", which finds its roots in the composer's home town, Atlanta, Georgia. The atonal piece has an electronic accompaniment aspect as well. There are musical elements that are meant to imitate techniques which are commonly utilized during the production of music within the genre. For example, in general the timpani performs what are intended to be "808s," while the tuba is often performing lines that would be reserved for synthesized bass; the combination creates an often utilized distortion technique.

Other production tactics travel through the ensemble as well. Certain aspects of the orchestration are imitating automation, which place sound exclusively in different spots of the ensemble (specifically on the left or right of the conductor) Sudden and gradual ensemble crescendos are dovetailing of melodies imitate low and high pass filters and volume knobs. Additionally, the piece aims to give the performers and audience a peek into a day in the life of an Atlanta resident.

The piece begins with the high-paced "It's Lit!" section which includes fortissimo exclamations occurring throughout the ensemble, demonstrating the hustle and bustle of the famed Atlanta traffic. The traffic sounds perform a trio with the clarinets and marimba, who depict a sense of "hurry and wait" as they endure the Atlanta traffic scene. The "Issa Vibe" section is much slower and intends to depict a night out on the town with friends, enjoying the city lights and the slightly slower paced environment.

For a short period, we return to "It's Lit!", followed by "Chopped and Screwed," which is a halftime recapitulation of the main themes. "Chopped and Screwed" is a famous DJ style which a song is slowed down tremendously. The piece closes out with one final return to the original marking of "It's Lit!" Enjoy a day in the life of an "AtLien" with Big City Lights!