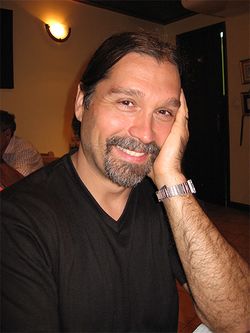 Bernard (Bernie) Scherr (b. 1963, Tulare, Calif.) is an American composer, conductor and trumpeter.

Dr. Scherr earned a BA and MFA in music from UCLA, and a Ph.D. in music from the University of Oregon. His composition teachers include Robert Kyr, Kathryn Alexander, Harold Owen, Paul Reale, and Mark Carlson; his conducting teachers include Thomas Lee, Samuel Krachmalnick, and William Hatcher; and he has participated in or attended master classes with George Crumb, John Harbison, Donald Martino, Wynton Marsalis, Bobby Shew, Christopher Hogwood, and Yehudi Menuhin.

His catalog includes over 100 works for orchestra, orchestra and chorus, orchestra and soloist, solo voice, chorus, wind ensemble, and various chamber ensembles. His orchestral works have been performed in California, Texas, and Europe, and he has received numerous commissions from professional and university ensembles. His chamber music is performed regularly across the U.S. and he has a growing European presence.

Dr. Scherr's orchestral conducting experiences include performances and/or readings with the UCLA Symphony Orchestra, the University of Oregon Symphony Orchestra, and the Hardin-Simmons University Orchestra. His musical theater conducting experiences include La Virgen Del Tepeyac at the Japanese American Theater in Los Angeles, and Cabeza De Vaca by Paul Humphries at the Royce Hall Experimental Theater in Westwood, California. He has conducted a variety of chamber ensembles including performances and/or readings with Third Angle, Talujon, the Oregon Boy Choir, and numerous premieres with the Oregon Composers Forum Concert Series.

The recipient of several awards at the University of Oregon, including the University of Oregon’s 125th Anniversary Composition Commission Competition, Dr. Scherr’s music has been recognized in competitions in Boston, Pennsylvania, and the Waging Peace through Singing Project in Oregon. As a vocalist and trumpet player, Dr. Scherr has premiered numerous works with the Oregon Composers Forum Concert Series and the Key City Brass Quintet.

Dr. Scherr has given research papers or presentations of his music in Portugal, Washington State, Oregon, California, and Texas. He is a frequent adjudicator of student composition competitions. He teaches a remarkably diverse curriculum at Hardin-Simmons University, including undergraduate and graduate courses in composition, counterpoint, ear training, form and analysis, harmony, history of music theory, keyboard harmony, music theory pedagogy, orchestration, post-tonal theory, and Schenkerian analysis. At HSU he is also the theory and composition head, director of the School of Music recording studio and computer lab. In recognition of his work in music education and his professional activities, he is on “The Wall of Fame” which consists of the outstanding graduates of his alma mater, Tulare Western High School in Tulare, California.