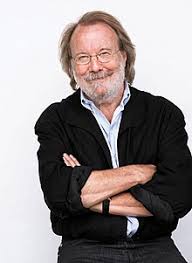 Göran Bror Benny Andersson (b. 16 December 1946, Stockholm, Sweden) is a Swedish musician, composer, and producer, and former member of the group ABBA.

Andersson's musical background comes from his father and grandfather; they both enjoyed playing the accordion, and at six, Benny got his own. His father Gösta and grandfather Efraim taught him Swedish folk music, traditional music, and schlager. When Andersson was ten he got his own piano, and taught himself to play. He left school aged 15 and began to perform at youth clubs. He joined the group Elverkets Spelmanslag where he wrote his first songs.

In October 1964 Andersson joined the Hep Stars as keyboardist, and they made a breakthrough in March 1965 with their hit Cadillac, eventually becoming the most celebrated of the Swedish 1960s pop bands. Andersson consolidated his place as the band's keyboardist and musical driving force as well as a teen idol. The band performed mostly covers of international hits, but Andersson soon started writing his own material and gave the band the classic hits No Response, Sunny Girl, Wedding, Consolation, It's Nice To Be Back and She Will Love You, amongst others.

Andersson met Björn Kristian Ulvaeus in June 1966, and the two started writing songs together, their first being "Isn't It Easy to Say", eventually recorded by the Hep Stars. He also had a fruitful songwriting collaboration with Lasse Berghagen.

Ulvaeus and Andersson, together with their wives, formed ABBA in 1971. After ABBA went on hiatus in 1982, Ulvaeus and Andersson created the musicals Chess, a collaboration with lyricist Tim Rice, Kristina från Duvemåla (based on The Emigrants novels by Swedish writer Vilhelm Moberg), and Mamma Mia! (based on ABBA songs).

Andersson currently performs with his own band of 16 musicians, Benny Anderssons Orkester ("Benny Andersson's orchestra", BAO), with lyrics to new material sometimes written by Björn Ulvaeus. BAO has released five albums to huge success in Sweden, all containing hit singles. In 2012, he received an Honorary Doctorate of Philosophy from the Luleå Tekniska Universitet Faculty of Humanities and Social Sciences. Andersson won the Swedish "Guldbaggen" award in 2012 as composer of the music for the film Palme.