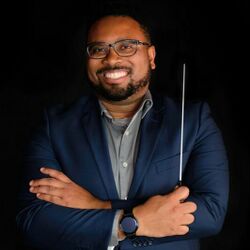 Mr. Horne earned his master's degree at the Jacobs School of Music at Indiana University and his bachelor’s at the Schwob School of Music at Columbus State University (Ga.) with degrees in music education, music performance, and a certificate in music composition. Horne studied composition with Dr. James Ogburn, Dr. Don Freund, and Dr. Sky Macklay.

His works and arrangements span various styles. Horne’s works and arrangements have received many honors and have been performed around the world, including at the Latzsch Trombone Festival in Germany, as well as performances at other events such as the International Tuba and Euphonium Conference and the International Trombone Festival. Mr. Horne has collaborated on works with several renowned classical artists such as Demondrae Thurman and Charles Vernon.

Horne's primary instrument is the euphonium. He was a member of the Teal Sound and Bluecoats Drum and Bugle Corps including the latter’s 2016 Drum Corps International World Championship corps. He currently performs as a member of the Sequence Euphonium Quartet (where he is their composer-in-residence) and with the Albireo New Music Collective as principal euphonium and trombone.

Mr. Horne's conducting mentors include Dr. Jamie Nix, Paul Hostetter, Dr. Jason Nam, and Dr. Rodney Dorsey. He has worked with various ensembles as a conductor and educator including the Georgia Brass Band. At Indiana University, Horne was an associate conductor for the IU Brass Choir and Brass Band.

As an educator, Mr. Horne served as a middle and high school assistant band director at Holcomb Bridge Middle School and Centennial High School in Roswell, Georgia, where he also led the jazz program. Horne is also a part of the brass staff at the Sacramento Mandarins Drum and Bugle Corps. He has also worked as an instructor and clinician across the United States teaching sectionals, private lessons, masterclasses, and marching band at all levels from beginners to university students.