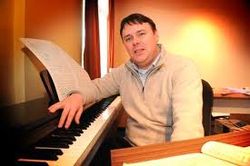 Ben Haemhouts (b. 1972, Bonheiden, the Netherlands) is a Belgian composer and conductor.

He began the study of music at the age of eight at the municipal music academy in Willebroek, Belgium. He then took advanced studies on the euphonium. Shortly thereafter, he was named principal euphonium with the Midden Brabant Brass Band, a position he held until 1999. At 17, he began studying trombone at the Lemmens Institute in Leuven, Belgium. During these five years, he won first prizes in chamber music, Solfège and trombone. He graduated with a Higher Certificate in Trombone with Highest Distinction. From September 1993 until September 1996, he played second trombone with the Rotterdam Philharmonic Orchestra.

In May, 1996, Mr. Haemhouts was invited to become guest teacher for Trombone and Euphonium at the Conservatory in Antwerp. In addition to teaching there, he currently performs with the Bamberg Symphony Orchestra, and also appears as a soloist with a number of bands and orchestras.