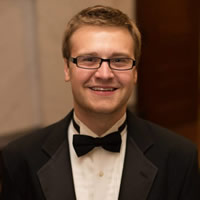 Ben Lee (b. 1993) is an American composer, arranger, and educator from south-central Kentucky.

His first performance in the pageantry arts was with East 80 Percussion, a WGI 2006 Independent A Medalist. Ben has performed as a soloist with the Western Kentucky University Wind Ensemble at the Kentucky Music Educators Association Conference and the Southern Division Conference of the College Band Directors National Association.

Ben has been bitten by the “band bug,” maintaining a marching band clientele spanning many states. Ensembles who use Ben’s arrangements have received state, circuit, and national acclaim.