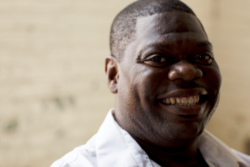 Baile si quiere! was commissioned in 2013 for Force Five, the wind quintet of the U.S. Army Reserve Band. The goal was to put a wind quintet upfront in a mix of Classical and Latin Jazz settings, with improvised solos not only in the quintet but from members of the band itself, thereby breaking through the staid 19th and 20th century wind band traditions and hopefully shuttling both ensemble types into a 21st century expectation.

The title of this work translates from the Spanish as "Dance if you like."