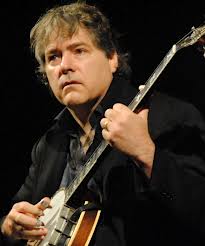 Béla Fleck (b. 10 July 1958, New York City) is an American composer and banjoist. Widely acknowledged as one of the world's most innovative and technically proficient banjo players, he is best known for his work with the bands New Grass Revival and Béla Fleck and the Flecktones.

Béla Fleck is named after Hungarian composer Béla Bartók, Austrian composer Anton Webern and Czech composer Leoš Janáček. He was raised by his mother, a former school teacher and claims he never met his father. He was drawn to the banjo when he first heard Earl Scruggs play the theme song for the television show Beverly Hillbillies. He received his first banjo at age fifteen from his grandfather in 1973. Later, Fleck enrolled in New York City's High School of Music and Art where he studied the French horn. He was a banjo student under Tony Trischka. Shortly after high school, Fleck traveled to Boston to play with Jack Tottle, Pat Enright, and Mark Schatz in the group Tasty Licks. During this period, Fleck released his first solo album in 1979,Crossing the Tracks, and made his first foray into progressive bluegrass composition.

Fleck played on the streets of Boston with bassist Mark Schatz. Along with guitarist/vocalist Glen Lawson and mandolin great Jimmy Gaudreau, they formed Spectrum in 1981. That same year, Sam Bush asked Fleck to join New Grass Revival. Fleck performed with New Grass Revival for nine years. During his nine years with New Grass Revival, Fleck recorded another solo album, Drive, which was nominated for a Grammy Award in 1988 in the new category of "Best Bluegrass Album".

Béla Fleck and Victor Wooten formed Béla Fleck and the Flecktones in 1988, along with keyboardist and harmonica player Howard Levy and Wooten's percussionist brother Roy "Future Man" Wooten, who played synthesizer-based percussion. They recorded numerous albums, most notably Flight of the Cosmic Hippo, their second album, which reached number one on the Billboard Top Contemporary Jazz Albums chart, and found increased popularity among jazz/rock/fusion fans. With the Flecktones, Fleck has been nominated for and won several Grammy awards.

In 2001, Fleck collaborated with long-time friend and playing-partner Edgar Meyer to record Perpetual Motion, an album of classical material played on the banjo along with an assortment of accompanists, including John Williams, Evelyn Glennie, Joshua Bell and Gary Hoffman. The album includes selections such as Chopin's Etude Op. 10 No. 4 in C# minor, Debussy's Doctor Gradus ad Parnassum, and Paganini's Moto Perpetuo (from which is derived the name), as well as more lyrical pieces such as the first movement of Beethoven's Moonlight Sonata, two of Chopin's mazurkas, and two Scarlatti keyboard sonatas. Perpetual Motion won two Grammys in 2002. Fleck and Meyer have also composed a double concerto for banjo and bass, and performed its debut with the Nashville Symphony Orchestra. Fleck and Meyer were later commissioned to compose a trio concerto, for which they teamed up with Indian tabla player Zakir Hussain. The concerto debuted in Nashville in 2006 and was later recorded for the album The Melody of Rhythm. The trio subsequently toured together in 2009 and 2010.

Fleck names Chick Corea, Charlie Parker, and the aforementioned Earl Scruggs as influences. He regards Scruggs as "certainly the best" banjo player of the three-finger style.

In 2005, while the Flecktones were on hiatus, Fleck undertook several new projects: recording with African traditional musicians; cowriting a documentary film called Bring it Home about the Flecktones' first year off in 17 years and their reunion after that time; coproducing Song of the Traveling Daughter, the debut album by Abigail Washburn; forming the acoustic fusion supergroup Trio! with fellows Jean-Luc Ponty and Stanley Clarke, and recording an album as a member of the Sparrow Quartet (along with Washburn, Ben Sollee, and Casey Driessen). In 2009, an independent film documentary of Fleck's visit to Uganda, Tanzania, The Gambia, and Mali, was released to limited run engagements in US cities. Throw Down Your Heart was directed by Sascha Paladino, Fleck's half brother. It was filmed during Fleck's year off from touring with the Flecktones.

Fleck premiered his Concerto for Banjo in Nashville, Tennessee on September 22, 2011, performing with the Nashville Symphony Orchestra, which commissioned the work.