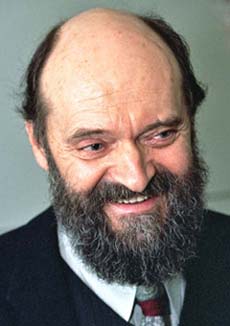 Arvo Pärt (b. 11 Seprember 1935, Paide, Estonia) is an Estonian composer of classical and sacred music.

Pärt was born in Paide, Järva County, Estonia, and was raised by his mother and stepfather in Rakvere in northern Estonia. He began to experiment with the top and bottom notes as the family's piano's middle register was damaged. His first serious study came in 1954 at the Tallinn Music Middle School, but less than a year later he temporarily abandoned it to fulfill military service, playing oboe and percussion in the army band. While at the Tallinn Conservatory, he studied composition with Heino Eller. As a student, he produced music for film and the stage. During the 1950s, he also completed his first vocal composition, the cantata Meie aed ('Our Garden') for children's choir and orchestra. He graduated in 1963 and worked from 1958 to 1967 as a sound engineer for Estonian Radio. In 1980 he emigrated with his family to Vienna and then, one year later, travelled on a DAAD scholarship to Berlin.

As one of the most radical representatives of the so-called ‘Soviet Avant-garde’, Pärt’s work passed through a profound evolutionary process. His first creative period began with neo-classical piano music. Then followed ten years in which he made his own individual use of the most important compositional techniques of the avant-garde: dodecaphony, composition with sound masses, aleatoricism, collage technique. Nekrolog (1960), the first piece of dodecaphonic music written in Estonia, and Perpetuum mobile (1963) gained the composer his first recognition by the West. In his collage works ‘avant-garde’ and ‘early’ music confront each other boldly and irreconcilably, a confrontation which attains its most extreme expression in his last collage piece Credo (1968). But by this time all the compositional devices Pärt had employed to date had lost all their former fascination and begun to seem pointless to him. The search for his own voice drove him into a withdrawal from creative work lasting nearly eight years, during which he engaged with the study of Gregorian chant, the Notre Dame school and classical vocal polyphony.

In 1976 his music emerged from this silence – the little piano piece Für Alina. It is obvious that with this work Pärt had discovered his own path. The new compositional principle used here for the first time, which he called tintinnabuli (Latin for ‘little bells’), has defined his work right up to today. The ‘tintinnabuli principle’ does not strive towards a progressive increase in complexity, but rather towards an extreme reduction of sound materials and a limitation to the essential.