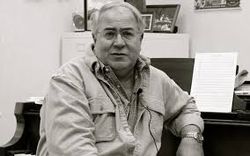 Arthur Gottschalk (b. 14 March 1952, San Diego, California) is an American composer. Raised in the Northeast, he attended the University of Michigan at Ann Arbor, receiving a Bachelor of Music degree in Music Composition, a Master of Arts degree in Music Composition and English Literature, and his Doctorate in Music Composition, studying with Ross Lee Finney, Leslie Bassett, George Balch Wilson, and William Bolcom. He is currently a Professor at Rice University's Shepherd School of Music, where he is Chair of the Department of Music Theory and Composition. In 1986 he co-founded Modern Music Ventures, Inc., a company which held a recording studio complex, a record production division, four publishing firms, and an artist management division, and for whom he produced records for PolyGram and Capitol. In 1998 Gottschalk divested himself of these latter holdings, in order that he might devote himself more fully to music composition.

Gottschalk's teaching specialties include electronic music, music theory, music composition, and counterpoint. He is responsible for teaching occasional eight-week CLE seminars on music business and law, and is in demand as a lecturer on music and technology, music in film, and music business and law. He is an active film and television composer, with seven feature films, twelve television scores, and numerous industrial films and commercials among his credits.

Among other awards, he is a recipient of the Charles Ives Prize of the National Academy of Arts and Letters, annual ASCAP Awards since 1980, and has been a Composer-in-Residence at the famed Columbia/Princeton Electronic Music Center and the Piccolo Spoleto Festival. He was recently honored with First Prize in the Concorso Internazionale di Composizione Originale Corciano (Italy), for his "Concerto for Violin and Symphonic Winds", and by the Houston Arts Alliance with an Established Artist Fellowship. With well over one hundred compositions in his catalog, his music is performed regularly in Europe, South America, Taiwan, and Australia, is recorded on Crystal, Summit, Capstone, Golden Crest, and AURecords, and is published by Spectrum Press, Subito Music, Shawnee Press, and European American Music Distributors (ASCAP). His book, Functional Hearing, was released in the Fall of 1997 and is published by Scarecrow Press, a division of Rowman & Littlefield.