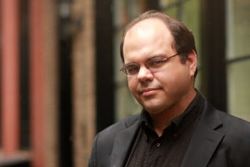 Dr. Bayolo began music studies at age 12. He went to study at the Interlochen Arts Academy when he was 16. It was there that he first began serious composition study. Bayolo earned degrees at the Eastman School of Music (Bachelor of Music, 1995), Yale University (Master of Music, 1997), and the University of Michigan (Doctor of Musical Arts, 2001). He studied composition with Samuel Adler, Joseph Schwantner, Christopher Rouse, Jacob Druckman, and Michael Daugherty, among others.

As a composer, Bayolo has written for a wide variety of ensembles, including orchestra, chamber ensemble, instrumental soloists, wind ensemble, choral, and vocal. He also is active as a conductor, and is founder of the Great Noise Ensemble, which has become an important force in contemporary music in the Washington, D. C. area. He has taught at Reed College and Hamilton College, and currently is on the faculty of the Peabody Conservatory of Music.