Archangel Raphael Who Leaves a House of Tobias 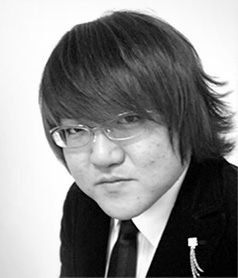 While traveling with Raphael disguised as a human, Tobias met Sara who was possessed by a demon. Following the instructions of Raphael, Tobias smoked the heart and the liver of a huge fish he had caught, and Sara was exorcised. Later, Tobias married Sara after heeding Raphael's advice, and they live happily after. When Tobias returned home, he poured the liver juice over the blind eyes of his father, and he regained his eyesight. Then, Raphael revealed his true self, instructed them to write down the story, and returned to Heaven.

The piece begins mysteriously with the woodwinds, which transforms into a melody that provides an image of the vast lands and seas. The middle of the piece portrays the obstacles that the two faced, and the end of the piece expresses how they overcame those obstacles and the ending of the story, where all is resolved.

Archangel Raphael Who Leaves a House of Tobias was written for the Osaka Philharmonic Winds (Yoshihiro Kimura, conductor) in 2008.