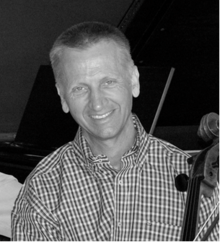 Antony Cooke (b. 3 August 1948, Sydney, Australia), is an Australian cellist, educator, composer, and author on musicology and astronomy, living in the United States.

Antony Cooke is the son of internationally renowned cellist Nelson R. Cooke, and was while his father was playing for the Sydney Symphony Orchestra. The family moved to London when his father was appointed principal cellist of the London Symphony Orchestra. Antony Cooke shares in his distinguished father's selection of the cello as a principal musical instrument; similarly, Antony Cooke has performed as a principal cellist and soloist in concerts throughout Europe and the United States.

Antony Cooke began his musical studies at the age of six, studying cello, later theory, composition, conducting and musicology, winning several music awards in London, including a Gold Medal in the venerable London Musical Competition Festival in 1966 and the "Young Musicians '73" Award. Mr. Cooke studied theory and historical musicology under John Wilkinson, composition under Nadia Boulanger protégé John Lambert, and conducting under Sir Colin Davis. In London, Cooke obtained Artist Diplomas from both the Royal College of Music and the Royal Academy of Music.

As a young BBC soloist, Cooke was regularly featured as a recitalist and concerto soloist under conductors such as Colin Davis and Harry Blech, including appearances at the Royal Festival Hall, Queen Elizabeth Hall, and Bath International Music Festival. In 1971, he was consequently appointed principal cellist of England's premier chamber orchestra at the time, the London Mozart Players, making Cooke the youngest principal cellist in the country.

Cooke moved to the United States in 1974, where he was appointed professor of cello at the University of South Florida. In 1980 Cooke was appointed Associate Professor of Cello at Northwestern University in Chicago, and was a member of the Regenstein Trio during his time there. In 1984, Cooke moved to Los Angeles, California, and soon established himself as a luminary of the Hollywood recording industry and as a published composer, writing music for film and prime time television. Mr. Cooke estimates having participated in approximately 1500 movie soundtracks, including many television and record productions, including contributions for the following works: The Amazing Spider-Man (Multiple Films); Avatar; and Back to the Future Among many others. He was also an Instructor at the Henry Mancini Institute in Los Angeles, from 1996 to 2006.

Cooke is a founding member of the Emerson Trio with pianist Dr. Donna Coleman] and violinist Endre Balogh.