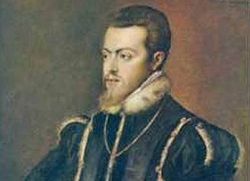 Antonio de Cabezón (30 March 1510, Castrillo de Matajudios, Spain – 16 May 1566, Madrid) was a Spanish composer and organist during the Renaissance.

Cabezón received most of his musical training in Palencia. In 1526, he became organist in the chapel of Quee isabella. He later served Philip II, often traveling abroad with him, and he was instrumental in Philip's marriage to Queen Mary of English.

Blind from early childhood, Cabezón is best known for his short liturgical works for the organ. He was also one of the greatest organ and clavichord performers and composers of the 16th century.