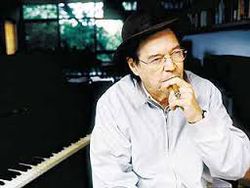 Antônio Carlos Jobim's father Jorge de Oliveira Jobim was a writer, diplomat, professor and journalist. When Antônio was still an infant, his parents separated and his mother moved with her children to Ipanema, the beachside neighborhood the composer would later celebrate in his songs. In 1935, when the elder Jobim died, Nilza married Celso da Frota Pessoa (died February 2, 1979), who would encourage his stepson's career. He was the one who gave Jobim his first piano. As a young man of limited means, Jobim earned his living by playing in nightclubs and bars and later as an arranger for a recording label, before starting to achieve success as a composer.

Jobim's musical roots were planted firmly in the work of Pixinguinha, the legendary musician and composer who began modern Brazilian music in the 1930s. Among his teachers were Lúcia Branco, and, from 1941 on, Hans-Joachim Koellreutter. Jobim was also influenced by the French composers Claude Debussy and Maurice Ravel, by the Brazilian composers Heitor Villa-Lobos, Ary Barroso, and by jazz. Among many themes, his lyrics talked about love, self-discovery, betrayal, joy and especially about the birds and natural wonders of Brazil, like the "Mata Atlântica" forest, characters of Brazilian folklore, and his home city of Rio de Janeiro.

Jobim became prominent in Brazil when he teamed up with poet and diplomat Vinícius de Moraes to write the music for the play Orfeu da Conceição (1956). Later, when the play was turned into a film, producer Sacha Gordine asked de Moraes and Jobim for a new score for the film Black Orpheus (1959). This collaboration proved successful, and Vinicius went on to pen the lyrics to some of Jobim's most popular songs.

A key event in making Jobim's music known in the English speaking world was his collaboration with the American jazz saxophonist Stan Getz, João Gilberto and Gilberto's wife at the time, Astrud Gilberto, which resulted in two albums, Getz/Gilberto (1963) and Getz/Gilberto Vol. 2 (1964). The release of Getz/Gilberto created a bossa nova craze in the United States, and subsequently internationally. At the Grammy Awards of 1965 The Girl from Ipanema won the Grammy Award for Record of the Year.

Jobim is widely regarded as one of the most important songwriters of the 20th century. He was a primary force behind the creation of the bossa nova style, and his songs have been performed by many singers and instrumentalists within Brazil and internationally. Widely known as the composer of Garota de Ipanema (The Girl from Ipanema), one of the most recorded songs of all time, Jobim has left a large number of songs that are now included in jazz and pop standard repertoires. The song Garota de Ipanema has been recorded over 240 times by other artists.

As a posthumous homage, on January 5, 1999, the Municipality of Rio de Janeiro changed the name of Rio's Galeão International Airport, located on Governador Island, to bear the composer's name. In 2014, Jobim was posthumously inducted to the Latin Songwriters Hall of Fame. In 2015, Billboard named Jobim as one of The 30 Most Influential Latin Artists of All Time.