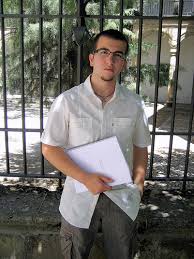 At just 13 years old, his Concertino for solo timpani was premiered by Nick Woud students at Amsterdam Conservatory of Music (2005). At 15 years old, Alcalde won the first prize in the II Iberoamerican Composition Contest for Band (2009) and also has won the first prize five times in the Galician Composition Contest for Band (2009, 2010 and 2011), being the youngest composer to be awarded. Alcalde has received the silver medal in the Global Music Awards (San Diego, California) and he was twice nominated to the Hollywood Music in Media Awards (Los Angeles, California).

Alcalde is professor of percussion and composer in residence at the School of Music from Rianxo. He is essentially an independent and self-taught composer from Galicia (Northwest of Spain), but the following teachers had a decisive influence on his formation: Rafael Collazo Moares, X, Carlos Seráns Olveira, Andrés Valero Castells and the band music of Rianxo, where he started with his first musical lessons.

In 2009, he entered the world of composition for the audio-visual medium, studying scoring for motion pictures and video games with prestigious professors including Conrado Xalabarder, Patrick Doyle, Wataru Hokoyama, Michael Giacchino, Andrea Datzman, Alejandro Vivas, and James Shearman, and continuing with master classes by teachers of renown such as Oscar Navarro.