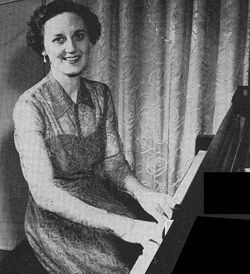 Broder was educated in England; she was a pupil of Sir Arthur Sullivan and Sir John Stainer at the Royal College of Music. She became an accomplished piano accompanist and authored the manual How to Accompany in 1893. She also lectured at the Royal Academy of Music, Dublin University and Oxford University.

She was a music critic for numerous journals in Britain before 1902, when she moved to Canada. She settled in Calgary, Alberta, where she maintained a piano and voice studio, and continued to write as a music critic, contributing to such publications as the Calgary Herald, Calgary News-Telegraph, Winnipeg Free Press and The Toronto Globe.