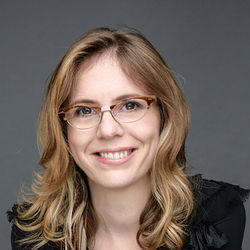 Clyne began writing music as a child, completing her first composition at age 11. She formally studied music at the University of Edinburgh, from which she graduated with a first-class Bachelor of Music degree with honours. She later studied at the Manhattan School of Music and earned a MA degree in music. Her teachers have included Marina Adamia, Marjan Mozetich and Julia Wolfe.

Clyne was director of the New York Youth Symphony's "Making Score" programme for young composers from 2008 to 2010. In October 2009, Clyne and Mason Bates were named co-composers in residence with the Chicago Symphony Orchestra (CSO), as of the 2010–2011 season. She took up the residency in 2010, for a scheduled term of two years. In January 2012, her CSO contract as co-composer in residence was extended through the 2013–2014 season. After completing her tenure with the CSO, Clyne was announced as the composer-in-residence for Orchestre national d'Île-de-France from 2014 to 2016 and for the Baltimore Symphony Orchestra's 2015–2016 season.

Clyne was nominated for the 2015 Grammy Award for Best Contemporary Classical Composition for her double violin concerto Prince of Clouds. She is also the recipient of several prestigious awards including the 2016 Hindemith Prize; a 2010 Charles Ives Prize from the American Academy of Arts and Letters; awards from Meet the Composer, the American Music Center, the Foundation for Contemporary Arts, and the Jerome Foundation; and prizes from ASCAP and SEAMUS. She was nominated for the 2014 Times Breakthrough Award (UK) and is the recipient of a grant from Opera America to develop a new opera, Eva.