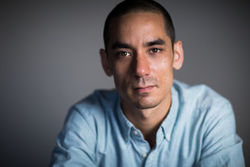 Andy Akiho (b. 1979, Columbia, S.C.) is an American composer and percussionist.

Andy Akiho is an eclectic composer and performer of contemporary classical music. Recent engagements include commissioned premieres by the New York Philharmonic, National Symphony Orchestra, Shanghai Symphony Orchestra, and Carnegie Hall's Ensemble ACJW; a performance with the Los Angeles Philharmonic; and three concerts at the Kennedy Center in Washington, DC.

He has attended the Aspen Music Festival, Heidelberg Music Festival, HKUST Intimacy of Creativity Festival, and Avaloch Farm Music Institute, where he is the composer-in-residence. Akiho's debut CD No One To Know One, on innova Recordings, features compositions that pose intricate rhythms and exotic timbres around his primary instrument, the steel pan.

Akiho has been recognized with awards including the 2014-15 Luciano Berio Rome Prize, the 2015 Lili Boulanger Memorial Fund, and the 2011 Finale & ensemble eighth blackbird National Composition Competition Grand Prize. Additionally, his compositions have been featured on PBS's News Hour with Jim Lehrer and by organizations such as Bang on a Can, American Composers Forum, and The Society for New Music.