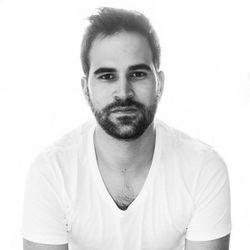 He studied trumpet at the Superior Music Conservatory of Vigo and then went on to complete higher specialization in composition in the same conservatory, under the tutelage of teachers such as Juan Eiras, Carlos Cambeiro, Pablo Beltrán and Fernando Buide, among others.

Andrés Álvarez specializes in composition for bands or audiovisual mediums, working with experts such as Angel Montes, Bart Picquer, Bert Appermont, Óscar Navarro and Ferrer Ferrán. Andrés has received various composing awards and his work has been performed widely and assigned in several competitions across Spain, as well as being played in several countries including France, Belgium, Holland, Italy, Japan, Venezuela and Colombia.

Andrés works in collaboration with the composer Óscar Navarro, , director Fran Casanova’s work on the soundtrack to Indiana Jones and the Search for the Lost Idol, and the orchestration of the soundtrack to La Mula for wind band and orchestra.

In the audiovisual field, he has worked for firms such as Adolfo Dominguez, Don Flamenco, Felicia Much and others in several short films and documentaries.