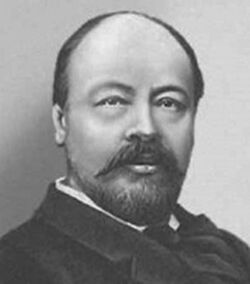 N.B. The more generally accepted transliteration of the surname is "Lyadov," not "Liadov."

Anatoly Lyadov (11 May 1855, St. Petersburg, Russia – 28 August 1914) was a Russian composer, teacher and conductor. He was born in St. Petersburg into a family of eminent Russian musicians. He was taught informally by his conductor step-father Konstantin Lyadov from 1860 to 1868, and then in 1870 entered the St. Petersburg Conservatory to study piano and violin.

He soon gave up instrumental study to concentrate on counterpoint and fugue, although he remained a fine pianist. His natural musical talent was highly thought of by, among others, Modest Mussorgsky, and during the 1870s he became associated with the group of composers known as The Mighty Handful. He entered the composition classes of Nikolai Rimsky-Korsakov, but was expelled for absenteeism in 1876. In 1878 he was readmitted to these classes to help him complete his graduation composition.

After his graduation, he began work as a music theory teacher at this conservatory. His pupils included important composers such as Sergei Prokofiev. Lyadov also carried out research on the folk music of Russia, and published a number of editions with arrangements of this music. He composed few large-scale works, writing mainly piano music; miniature compositions that later found their way into arrangements and transcriptions for symphony orchestra or concert band.

At a young age, Lyadov was strongly influenced by the Russian national movement, in the sphere of Balakirev and company. Lyadov felt connected to their ideas through his affinity with Russian melody. The oriental exoticism in his music was also notable. Through his brilliant orchestration and daring harmonies he further developed aspects previously explored by Borodin and Rimsky-Korsakov.

Although respected as a conductor and composer, Lyadov was notoriously unreliable, lazy and insecure. A number of telling anecdotes are testament to this. The first is his dismissal from the conservatory due to his indolence as a student. After that, in 1910, Lyadov did not finish his commission to write music for Diaghilev’s ballet The Firebird, so Diaghilev asked Rimsky-Korsakov’s brilliant student Igor Stravinsky instead, who thus received his first important composition commission. The rest is history.

One of the compositions he did finish, which went on to give him some fame, is Dance of the Amazon, which he wrote at the request of the dancer Ida Rubinstein. This charming work, based on two Greek folk melodies, was to be one of his last creations. Lyadov died in Polinovka, near Novgorod, and was buried in the Alexander Nevsky Convent in St Petersburg.