American Rhapsody (for Band), An 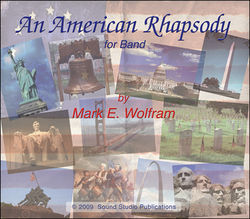 An American Rhapsody features strong, memorable melodies, fresh and unexpected harmonic twists, as well as stylistic, tonal and rhythmic variations that are sure to keep both the musicians and the audience thoroughly engaged. While not a particularly "patriotic" sounding work, it is totally American in content and character. The title page of the score is inscribed with the following paragraph: "From the struggles of early settlers, to the galvanizing battles of colonists fighting for independence, through the many wars and battles since, the American people have sacrificed greatly and bonded to form a nation undivided. Their song of freedom and liberty is built on common purpose and is filled with both harmony and dissonance - it is An American Rhapsody."

After a rubato dialogue by a solo flute and clarinet, several more solo instruments as well as section brass enter as the texture fills out. A gradual tempo increase leads to a quick pace as a punctuated underpinning supports a floating woodwind theme. The tempo slows through a choral-like transition to a cakewalk feel. That section is followed by a smooth, melodic theme - first in subdued trumpets and then reprised by the full band. Following an interesting counterpoint by the woodwinds, several solo passages follow as the work transitions through a harmonic kaleidoscope - and then finishes with a strong, well-developed fanfare, starting with brass and percussion and then adding the entire ensemble.