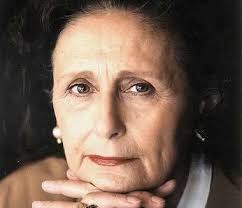 Alicia Terzian (b. 1 July 1934, Córdoba, Argentina) is an Argentine conductor, musicologist and composer of Armenian descent.

Ms. Terzian studied at the National Conservatory of Buenos Aires under Alberto Ginastera, Gilardo Gilardi, Roberto García Morillo and Floro Ugarte, and received a degree in piano in 1954 and a degree in composition in 1958. In 1962 she continued her studies in electronic music and medieval Armenian church music with Father Leoncio Dayan at the Mekhitarist Monastery of San Lazzaro degli Armeni, Venice.

After completing her studies, Terzian taught music in Argentina at the National Conservatory, the Municipal Conservatory of Buenos Aires, the Universidad Naciónal de La Plata and at the Art Institute of the Teatro Colón. She founded the Fundación Encuentros Internacionales de Música Contemporánea (EIMC) festival in 1968 and the Grupo Encuentros in 1979.

Her activities as composer, conductor, musicologist and promoter of contemporary music have brought her recognition not only within her country but also abroad. She was the recipient of numerous prizes; among the most important are the Orchestral Composition First Prize by the Municipalidad of Buenos Aires City (1964); ‘Francisco Solano’ Prize for her promotion of the Argentine music (1968), and the Outstanding Young Yearly Award by the Junior Chamber of Buenos Aires (1970).

Due to her deep knowledge about Armenian religious music she was accepted as a member of the International Society of Musicology; she attended the annual meetings in Ljubljana (1967) where she was appointed to integrate the consultive committee and, later on, secretary of the Board of Council of the International Musicology Society.

In 1985 Terzian was appointed president of the Argentine Music Council (IMC/CIM), having developed until 2005 an intense national and international activity through seminars and congresses attended by the most prestigious musicians, educators, musicologists, instrumentalists, composers, orchestra conductors, soloists and chamber groups, thus bringing her country forward in world recognition.

She was elected the president of the Three Americas Music Council COMTA (CIM-UNESCO-Paris), this latest appointment was held until 2004. During the period 1979-2006 she was the delegate to the International Rostrum of Composers (UNESCO-CIM-Paris); director of the National Fund for the Arts in 1985-1989; artistic director of CABLEVISION and the broadcast of the programme ‘Musical Encounters with Alicia Terzian’ having presented the most important Argentine and foreign artists in concerts; and Jury of the International Contest in Orleans (2002,2204, 2006 and 2014), among many other organizations.