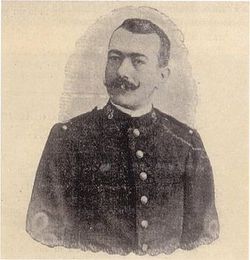 He studied violin and solfeggio in Elche, although his father wanted him to become a telegraph operator. He moved to Barcelona to study violin, harmony, and composition with Felipe Pedrell and also played violin in several theater orchestras there. He then went to Paris on a scholarship to take further violin studies. However, an accident on a streetcar produced a lesion on his left hand that made it necessary for him to abandon the violin.

He returned to Elche, founding and directing the Escala Band, and then went to Cartagena to lead the Seville Infantry Band. In 1922, he went to Morocco and led the Banda de Cazadores de Extremadura. In 1924, after his retirement from military service, he returned to Elche and founded the municipal band. He also was choir director at the Santa Maria Church.

Although Javaloyes composed many zarzuelas, sacred works, and pasodobles, his fame rests almost entirely on the pasodoble El Abanico. It is popular throughout the world and is used today for the changing of the guard at the king’s palace in Madrid.