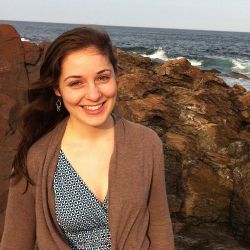 Ms. Rinn received her Master of Music degree in composition from the Peabody Institute in 2014 and graduated in 2012 from Boston University’s College of Fine Arts with a Bachelor of Music degree in composition and theory. While at BU, she studied with Rodney Lister, Samuel Headrick, and Ketty Nez, and she spent a semester abroad in 2010 at the Royal College of Music in London, England, where she studied with Alison Kay. She is currently [2018] pursuing her doctoral degree in composition at the Peabody Institute of the Johns Hopkins University in Baltimore, Maryland, where she continues to study with Michael Hersch, as well as with Amy Beth Kirsten.

Ms. Rinn has had her music performed at the Norfolk Festival, the HighScore festival, New Music On the Point, Boston University, the Peabody Institute, and in the National Portrait Gallery in London.