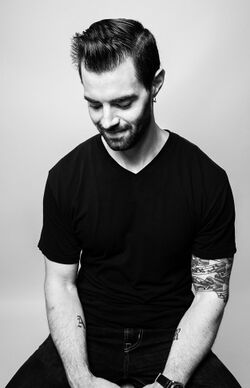 Dr. Burtzos holds a DMA from Manhattan School of Music, where his primary teachers were Reiko Fueting and Mark Stambaugh.

As a composer, Alex is committed to pursuing artistic expression unconstrained by boundaries of school or style. His work often incorporates elements of the 20th century avant-garde, jazz, rock, metal, and hip-hop alongside or against classical/preclassical structures and sounds, justifying these juxtapositions with a great depth of musical ideas and extra-musical knowledge. Alex’s music takes as its basis and provides commentary on a diverse array of subject matter, from early colonial history to recent events, from Shakespeare’s tragedies to naughty text messages.

Burtzos' music has been performed across four continents by some of the world's foremost contemporary musicians and ensembles, including JACK Quartet, Yarn/Wire, loadbang, Contemporaneous, ETHEL, Jenny Lin, RighteousGIRLS, and many others.

Alex is the founder and artistic director of ICEBERG New Music, a New York-based composers' collective, and conductor of the hip-hop/classical chamber orchestra ShoutHouse. As artistic director of ICEBERG New Music, Alex leads one of the most adventurous and dynamic composers’ collectives active today. Since 2016, the ten members of ICEBERG have produced concerts and delivered lectures across North America, and engaged in educational outreach in schools in New York and Tennessee.

Alex exclusively conducts contemporary repertoire, and has given over 40 world and regional premieres by emerging and established composers. As conductor of ShoutHouse, he blends elements of jazz and classical conducting styles to cultivate a unified, engaging sound that's "incomparable to anything existing."

Dr. Burtzos is the endowed chair of composition studies at the University of Central Florida, where he teaches composition, orchestration, film scoring, video game scoring, and music technology.