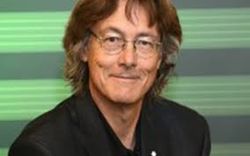 Allan Gordon Bell (24 May 1953, Calgary, Canada) is a Canadian composer and educator.

From 1978-1980, he was Chairman of the Alberta Composers Festival and composer-in-residence at the Alberta Provincial Music Workshop (1980). In 1978, he began teaching composition and theory at the University of Calgary. He has written music for orchestra, chamber ensembles, dance, theater, and for young musicians.

Allan Gordon Bell was born in Calgary in 1953. He received a Master of Music degree from the University of Alberta where he studied with Violet Archer, Malcolm Forsyth, and Manus Sasonkin. He also did advanced studies in composition at the Banff Centre for the Arts where his teachers were Jean Coulthard, Bruce Mather, and Oskar Morawetz.

He has created works for solo instruments, chamber ensembles, orchestra, band, and electroacoustic media. His works have been performed by the National Arts Centre Orchestra, Calgary Philharmonic Orchestra, Esprit Orchestra, the Vancouver Symphony Orchestra, the Manitoba Chamber Orchestra, the Edmonton Symphony Orchestra the Orford String Quartet, the Purcell String Quartet, the ensembles of Toronto New Music Concerts, Arraymusic and the Société de musique contemporaine du Québec, and many other professional and amateur organizations in Canada, the United States, the United Kingdom, West Germany, Israel, and Japan.

In 1988, his Concerto for Two Orchestras was performed at the Olympic Arts Festival; in 1989, his Arche II was performed by the finalists at the Banff International String Quartet Competition and was sent by the CBC as the English Network submission to the International Rostrum of Composers in Paris. In February of 2002, Bell was the distinguished visiting composer at the Winnipeg New Music Festival where four of his compositions were performed by the Winnipeg Symphony Orchestra. CBC Records has released a CD entitled Spirit Trail: The Music of Allan Gordon Bell that contains five of his orchestral pieces.

In 2012, for his contribution to Canadian contemporary classical music and culture, Bell was made a Member of the Order of Canada. Previously, The Association of Canadian Choral Conductors had presented him with an award for outstanding choral compositions (in 1994 and again in 1999). He has also been the recipient of numerous teaching excellence awards. In 2014, Bell received a Juno Award for his Field Notes in the Classical Composition of the Year category.

Bell is Professor of Music at the University of Calgary. From 1984 to 1988, he served as President of the National Board of the Canadian Music Centre.