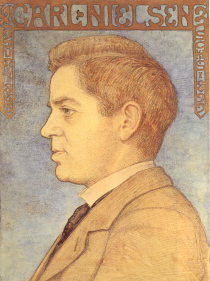 This work bears the designation Opus 34.

The stage music for Aladdin was written at the request of Jhannes Nielsen, the director of the Royal Theatre in Copenhagen. This production was based on the drama Aladdin (1805) by the Danish author Adam Oehlenschläger.

Already before the premiere at the Royal Theatre, Carl Nielsen had adapted some of the music for the concert hall: he conducted the first performance of six of the seven movements of the concert suite on February 6th, 1919. Johan de Meij's transcription for symphonic band contains the following movements: I Oriental Festival March; II Aladdin's Dream / Dance of the Morning Mist ; III African Negro Dance.