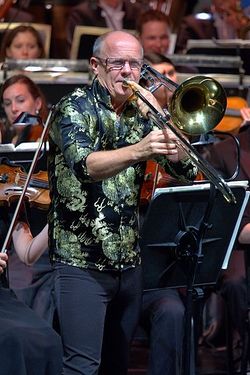 Subtitle: For Trumpet and Chamber Orchestra

It was in September 2003, after taking part in the Austrian première of my double concerto Behac Munroh, that Ole Edvard Antonsen asked me if I would write a 15-minute piece for him and the Scottish Chamber Orchestra. We listened to some of his recordings – some wonderfully childish songs written for his son – and I was amazed by the beauty of his sound in these pieces.

The opening of my piece could not have been written had I not first heard this. Afterwards my work on the piece was influenced by one thing after another. In the middle of writing the fast section of the first movement I was contacted by a Turkish orchestra about a concert; while working on the second movement I was planning a Japanese tour for my new orchestra, the Nordic Chamber Orchestra; and as I was starting the third I got a call from Ole saying he was in New York playing oriental jazz. These small incidents had a strange impact on the piece itself, even if I was almost not aware of it at the time. The title is a combination of Turkish and Japanese, "Akbank" being the name of a Turkish bank and "bunka" meaning culture in Japanese. I could tell you a lot more about the different six composition techniques I used and the work’s orchestration, form and analysis – and bore you to death. But I will not. Instead I’ll end this little note with the hope that you will have as much fun listening to the piece as I had writing it!