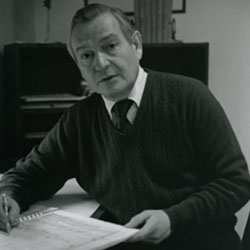 This piece was written in 1967 as an orchestral overture for the Washington National Symphony and was premiered by that group under Howard Mitchell a year later at Constitution Hall. Its immediate success then and on tour occasioned the collaboration between Makris and Albert Bader of the U.S. Air Force Band to arrange the overture as a concert piece for band.

From its first hammering dotted eighth rhythms, Aegean Festival Overture reflects the Greek origins of its composer, who was born in Salonika, a colorful Aegean seaport. The driving energy of the fast section with its restless 5s and 7s and the lyric plaintiveness of the contrasting middle section, all molded into a symphonic form, epitomize the musical style of Makris that is a blend of classic form and Greek folkloristic elements.

While both melodies and rhythms of the Aegean Festival Overture have been undoubtedly influenced by the Greek folk music, there is nothing which has been taken directly from the folk music, and it is all original. If one looks through the pages of the Aegean casually, one would at once see a definite characteristic, and that is irregular and multiple rhythms.

To quote the composer: “Concerning the melodies, they are all original, but my memories from Greece, the climate, sky, beautiful sea, the gaiety and sorrow of the Greek people undoubtedly have contributed to the general character of these melodies. The elaborate clarinet cadenza is a shepherd’s inspiration but obviously too sophisticated to actually be played by the lonely shepherd.”