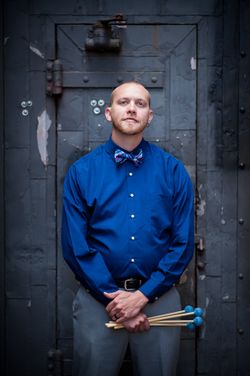 Ad Astra was commissioned by the Washburn University Percussion Ensemble in late 2008. Its title is an homage to the state of Kansas whose state motto is "Ad Astra per Aspera," which translated means "To the Stars Through Difficulty."

This composition is an exploration of minimalism, composite rhythms, and texture. Within this piece, there are three “sets” of composite rhythms within the overall rhythmic structure of the ensemble. These “sets” are established by pairing the instruments: Marimbas 1 and 2, Vibraphones 1 and 2, Marimbas 3 and 4. Throughout the piece these “sets” often play the same material staggered by a varying rhythmic interval, creating a composite sound.

The opening gains a great deal of its influence from Steve Reich’s Nagoya Marimbas in the sense that all of the instruments blend amorphously to form a single sound rather than emphasizing any one instrument. By using composite rhythms and changes in time signature, the sense of a down beat is masked until specific points within the piece. The central section of this piece contains a greater exploration of texture. The melodic interest weaves its way through the ensemble while still keeping the sense of the musical “sets.” During this section the intensity is greatly increased leading up to the first unison passage of the piece. From this point there is a series of sections which move between six-person amorphous texture and the weaving melodic material. This creates an increase in tension which builds to an unexpected end.