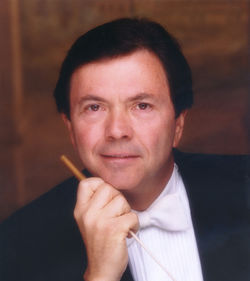 One of the most striking characteristics of music for the concert band is that much of the core repertoire was composed over the last century. While the band does not enjoy the same historic breadth of repertoire as does the symphony orchestra, it has staked a large claim in the ever-evolving world of contemporary music. What has resulted is a canon of works that are often realized with the composer’s direct participation, a process that is defined by a vibrancy and authenticity that is much more difficult to achieve with the score alone. That collaboration between ensemble and composer reaches its zenith when the composer takes the podium to bring his own work to life. Maestro Schwarz offers the following thoughts about the world première of his Above and Beyond:

I have always been a lover of music for winds. In my youth, I was a trumpet player and firmly believed in the wonderful expressive possibilities of my chosen instrument along with all of the wind instruments. I have always been a champion of our American composers and most of the original music for band is by Americans. I am constantly amazed to hear and see the programs of our university bands because of the predominance of American twentieth and twenty-first century music ... In recent years, I have been devoting more and more time to composition and I remember so well my lessons with Paul Creston at a time when he was writing some of his wonderful works for band.

My original idea was to write something that was generally slow and expressive, as I felt that the Marine Band is so accomplished that they could sustain a real adagio just as a string section can. My piece certainly started that way, with the upper woodwinds and vibraphone overlapping a series of chords that outline the first theme. This material was then answered by a complimentary theme played as a chorale by the lower brass. I varied these two melodies and overlapped them, eventually adding some fast material in the woodwinds leading to a wild middle section. As the work evolved, I couldn’t resist taking advantage of the band’s remarkable capabilities. I realized that I needed to have an introduction that could be brought back at this point in the piece, so I wrote an opening for solo trumpet and revisited this theme in the horns at the height of the work’s development, culminating with a noble statement of the theme for the full brass section. The coda of the piece brings back the more contemplative material from the opening overlapping wind music to bring the work to a funereal close.