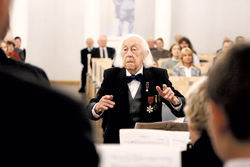 Regi worked to inmprove teacher recruitment and conducting, and published books on the topic. He wrote pieces for wind orchestra, clarinet, violin and trumpet solo songs and music theater. Regi has published a book of teaching woodwinds (1970) and the orchestral work (1986), among other works.